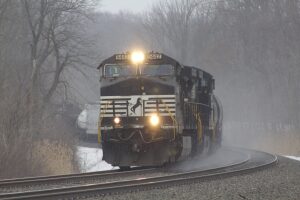 Jack Galloway passed away June 6, 2022 at the age of 96. He was born July 1, 1925 in Almont, Alabama to the late Alonzo Clay Galloway and Rozelle Martin Galloway.

He enlisted in the United States Army Air Corp in 1942 serving in the Pacific Theatre during World War II being honorably discharged at the rank of Sergeant in 1946.  For over 39 years, Jack was employed by Norfolk Southern Railway serving as a Brakeman, Switchman and Conductor.  For over 70 years, Jack was a faithful member of the Church of the Nazarene, Selma/Valley Grande.

Funeral services will be Friday, June 10, 2022 at 11:00 am in the chapel of Lawrence Brown-Service Funeral Home with Reverend Larry Stover officiating. The family will receive friends beginning at 10:30 am. A private burial will follow at New Live Oak Cemetery.

In lieu of flowers, donations may be made to Praise Park Ministries, Church of the Nazarene, 1 Big Pine Drive, Valley Grande, Alabama, 36701.